There seems to be a trend in our western culture that there are certain tips and tricks to get a baby to sleep through the night. Why we even think babies should be sleeping better than us adults, is the very first place we go wrong. Yes, some babies are deep sleepers and are able to sleep 12 hours through the night without waking from 2-3 months on. I even have a good friend who has experienced this. If you’re expecting a baby, or are a new parent, just do yourself a huge favor and remove the thought from your brain right now that your baby might do such a thing though. That way, if it does happen, you will be stoked at your immense amount of luck. Chances are it will not, and you need to be mentally prepared. If there is one thing I have learned about motherhood, being mentally prepared that a certain baby behavior or bodily function is completely normal, is the first step to accepting life gracefully and moving forward peacefully.

My mommy brain doesn’t remember much these days, but I cannot get this one specific conversation out of my head. Our midwife was over the house for our last postnatal visit around 8 weeks postpartum. She asked how Big Guy was sleeping, and I responded with something like, “He sleeps about 12 hours at night, only waking once! We really lucked out. Maybe next baby we won’t be so fortunate.” My midwife said something of the sort, “That’s great to hear Anna! I know my kids were great sleepers for a few weeks, and then we’d have a few weeks of not-so-great sleep, so I hope he stays a good sleeper for you.” Then I responded with something like, “Yea, we’ll see!” I. Was. So. Naive.

Just a few days before Big Guy turned 3 months old, we were at my nephews birthday party when a woman asked how he was sleeping. I told her, and she said her sister’s baby was 1 1/2 years old and still not sleeping through the night and they couldn’t figure out why, so we were very lucky to have a good sleeper on our hands. That very night, we put him down to bed, and all of a sudden 3 hours later, he woke up crying. My husband and I just looked at each other in disbelief and wonder. This continued for the rest of the evening, every 2-3 hours until morning. My husband had to leave the next day to go to NYC on business, and the good sleep did not return. It was a very exhausting week alone. This went on however, for about 5-6 weeks. During this time I learned about the “4 Month Sleep Regression“, or 3 months in my lucky case, and the wide world of The Wonder Weeks. I kept asking, “WHY HADN’T I HEARD OF THIS BEFORE?!”, and no one in my circle of friends and family seemed familiar with it either. Then I begrudgingly remembered the above conversation with my midwife, and realized someone had warned me, I just chose to ignore it.

I didn’t, and still don’t, have the time to read The Wonder Weeks, so I downloaded their app on my iPhone for $1.99. It basically explains the “mental leaps” that every baby goes through and the possible side effects. The peace of mind that came along with knowing it was completely normal is underrated. I also happened to text with a girlfriend whose baby is 5 weeks older than Big Guy, and she was going through the exact same thing. Not feeling alone, feels so good. The bad news was that every few weeks another mental leap would occur, and every few weeks we have gone through a 4-6 week long sleep regression. Not just a sleep regression either, he wants to nurse to sleep during this time, when before he didn’t need to. He cries more often upon waking, when normally he wakes happy and plays with his toys (he sleeps on a Montessori floor bed so is able to move about his room). He also doesn’t do this “happy squeal” my husband and I like to call it during these mental leaps. It is quite incredible to watch, when I can get past the sleep deprivation and often fussy baby. Like clockwork, as soon as the app tells me that mental leap is ending, he goes back to “normal”! 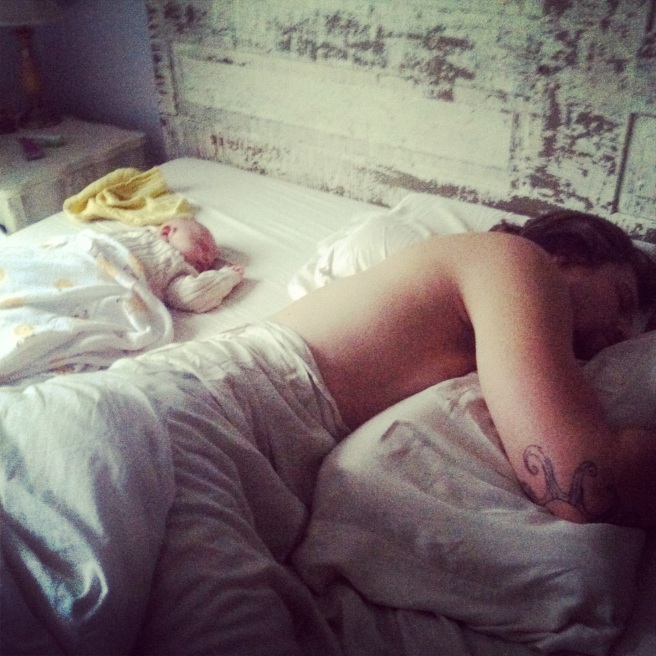 Now, I must admit that after his 5th mental leap at around 6 months old, he never went back to only waking once in the night, rather twice. Then after this past 6th mental leap at 8 months old, we only had a few days of him waking only twice, and the last week he has been up seriously every 1-3 hours. There is apparently an “8, 9, or 10 Month Sleep Regression” also. He typically can nurse back to sleep, but I also don’t want to always rely on that either, so if my husband is still awake, he tries to settle him first. I’m in a conundrum the rest of the time, more sleep vs. bad habits. Don’t worry, more sleep wins almost every time and I’m not going to stress about it. Every time I stress about it, I have a few moments or nights of “normalcy” to reaffirm that our good habits are not lost forever. Like I said before, it’s much more common and normal than people realize for babies to not sleep well until they are developmentally ready to on their own time, regardless of the tips and tricks people want to sell you. When he wakes, he means business. I can only dream that he will be as determined and passionate as an adult as he is when waking in the night!

Like all parenting choices, I need to do what I need to do for everyone to get the best rest possible while remaining respectful to the needs of our child. I might try putting Big Guy in the pack-n-play at night instead of his floor bed, to see if that will help. The last few nights, I have fallen asleep next to him and he will wake up part of the way fussing, and literally doing barrel rolls down my body until he tries to get off the bed and escape for the door. I do wonder if he was confined to the pack-n-play during this time, he might settle himself back to sleep. He is also teething. Then again, my mother-in-law always tells me how my husband did not sleep well until his brother was born when he was just shy of 2 years old. I very well could have a while to go here…

They’re only babies for a very, very short time and like everyone always says but it’s oh-so-true, “This too shall pass.” It’s easy to think it’s not passing soon enough, but then I’d be missing the wonderful things happening right now, so it’s just not worth wasting time worrying about it. I have faith I will get 8 hours of uninterrupted sleep again one day but at the same time I will be sad that the days of Big Guy being a little baby will be gone forever. I’d much rather enjoy the present moment for all it’s ups and downs, sleep deprivation and all.

Restful Sleep Even If It Is Only An Hour At A Time,

*07/23/14 Update: We have now entered the fussy phase of Leap 8 this week, the “world of programs”. Sleep is still horrible, but again it did not get better after Leap 7 ended. I am convinced we created a bad habit somewhere along the line, and he almost always requires nursing back to sleep now, even when some nights he falls asleep all on his own without nursing. On Monday, 07/07/14 I had lost all hope he would ever sleep better until he is like 2 years old but then read “The No-Cry Sleep Solution” by Elizabeth Pantley the very next day and regained a little bit of hope again. I am currently in the process of implementing her suggestions because waking 3-7+ times a night is not working for me after 12 months. I will keep you posted on the outcome! P.S. During a mental leap we have noticed he is more tolerable to diaper changes while laying on his back, but when not in a leap he absolutely refuses to lay on his back. It makes changing a dirty pre-fold cloth diaper an Olympic sport.

**09/27/14 Update: After implementing Pantley’s main suggestions for over 30 days with even worse results, I decided to use all of her “if you are about to give up all hope, your child may need you to do ___”. When he would wake up, we stopped going into his room, rather my husband went to the door and said something along the lines, “It’s time for bed. Go back to bed. I love you. Good night!” More often than not, he cried for a little bit longer, then stomp-crawled back to bed. After about 4-5 days of this, he finally slept from 7pm-3am without waking! After a few weeks of this, he has finally slept through the night a few times. I think it’s safe to say we’re on the road to recovery. Until next baby.